Crayfish are small crustaceans that reside in freshwater habitats (Olden 2009). Their anatomy is strikingly similar to marine lobsters’, their closely related cousins. Crayfish breath using gills, and are good ecological indicators of water quality. Most crayfish are rather delicate, and cannot survive polluted, dry, or saline situations. However, the red swap crayfish is incredibly robust for its species, and has the capacity to tolerate undesirable habitats and environments. This species can easily be found in calm, fresh waters including ponds, slow streams, and rasacas.

Red swamp crayfish are sensory organisms that use their bodies to feel and taste their surroundings (Turner et al. 1999, Zulandt et al. 1999). Every movement is coordinated; and legs, antennae, claws, eyes, and tail are all directed in a way that optimizes survival (Hughes and Wiersma 1960). These crayfish can expend little energy perched on a rock filter-feeding, their slender legs and v-shaped feet pick through small stones in search of food, their large claws act as both a balancing mechanism and superior weapons. Both sets of antennae are constantly searching for food, and instantly recognize when food has entered the water (Zulandt et al. 1999).

Juvenile crayfish establish hierarchies amongst themselves, and adult crayfish are able to recognize individuals who have acted aggressively towards them in previous encounters (Bergman and Moore 2003, Issa et al. 1999, Keller and Moore 2000, Zucker 1971, Daws et al. 2001). There is a highly social and ranked culture among crayfish, whose establishment is founded on strength and gusto.

Aggressive, subordinate, feeding, and cleaning behaviors were examined for three crayfish of varying size and color. Crayfish were obtained from a rasaca and placed in an aquarium. The aquarium was equally lit on both sides by two lamps (Figure 1). Crayfish were allowed to adjust to the aquarium for a week, and allowed to adjust to the light for a minimum of two hours before observations began. Crayfish were viewed for a total of ten hours. Behaviors were analyzed continuously for 1-2 hour periods at a time.

Aggressive behavior was initiated when a crayfish’s body would become erect, raise its claws above its head, and move them in a sweeping motion. Culmination of aggressive behavior occurred when one crayfish would attack an opposing crayfish. Attacks consisted of pinching, ramming, and climbing on the foe. Subordinate behavior occurred when an aggressor approached and foe, and the foe retreated. Two types of retreat were counted: walking or running away, or swimming backwards in a projectile fashion. Crayfish were fed chicken or turkey in excess once a day. Each return to the feed was counted as a new feeding behavior. Cleaning consisted of the crayfish rubbing their legs and claws across their carapace, legs, claws, eyes, and antennae. Behaviors were considered stopped when the crayfish ceased preforming them. Behaviors were considered new and tallied when crayfish started them after previously exhibiting a different behavior (usually sitting).

Crayfish did exhibit a pecking order that appeared to be based on size. The largest crayfish, Crayfish 1, had the highest rate of attack. The smallest crayfish, Crayfish 3, had the highest rate of avoidance, causing him to have the highest number of documented behaviors in the tank. Crayfish, however, did not eat and clean the same amount. Crayfish 1 spent the most time cleaning, while Crayfish 2 spent the most time eating. Crayfish 3 did very little of these activities. These results hint that size may be a key component to crawdad behavior. Hormones, body mass, or experience may regulate behaviors at different stages of development, and more precise measurement and implementation may help distinguish any potential influences. It may also be valuable to attempt to mate and raise crayfish in isolation to decipher which behaviors may be learned and which are innate. Cross-fostering experiments between crayfish species may also help identify species-specific behaviors.

A more detailed study of individual behaviors is necessary for this species. Each behavior is so complex and multi-faceted that careful examination of only leg use, feeding, antennae, etc. should be conducted. The initial behavioral examinations of this study were far too broad, and although this study showed potential trends in crayfish behavior, a more detailed study will help tease these out.

During this study, crayfish also presented scototaxis-like behaviors. When both lamps were turned on, illuminating the fish tank, crayfish became tense and attempted to avoid the light and retreat into darker areas. Examination of this species in the terror tanks would be interesting, and may help to explain additional behavioral tendencies.

Hughes, G.M. and C.A.G. Wiersma. 1960. The co-ordination of swimmeret movement in the crayfish, Procambarus clarkii (Girard). Journal of Exploratory Biology 37: 657-672.

Turner, A.M., S.A. Fetterolf, and R.J. Bernot. 1999. Predator identity and consumer behavior: differential effects of fish and crayfish on the habitat use of a freshwater snail. Oecologia 118: 242-247. 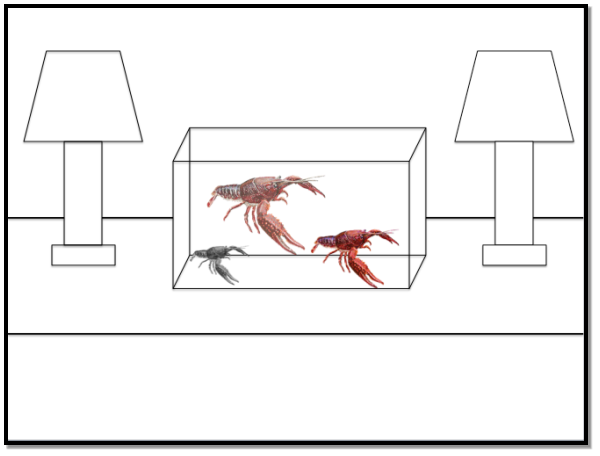 Figure 1. Diagram of experimental design. Three red swamp crayfish of varying color and size were place in an aquarium with two lamps on either side, providing equal lighting within the aquarium. 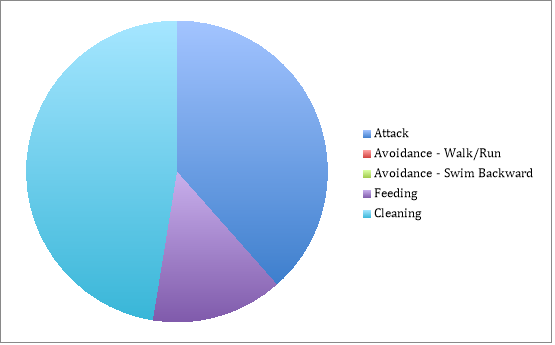 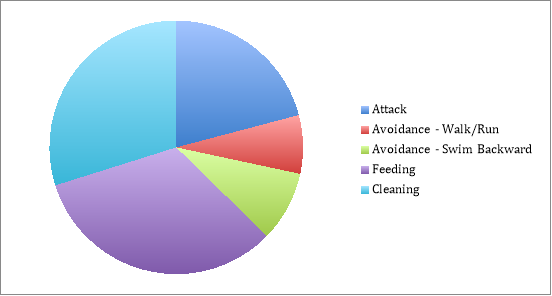 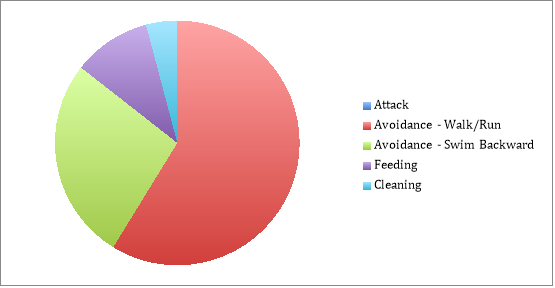