Although these plants are most commonly known for their blue-dye colour there is a long tradition of them both being used medicinally, particularly in the treatment of infection.

This essay seeks to explore traditional and modern medicinal uses of the plants and consider potential future therapeutic use.

The binomial nomenclature of each plant recognises its value to people as a dye-plant with the species names ‘tinctoria’ and ‘Baptisia’ also referring to dying. (Hoffman)

The common names of each plant provide clues to their history in Western awareness:

Dried per day: not found

For medicinal purposes the leaf and the root of both plants are utilised.

B. tinctoria shows a tincture dosage while I. tinctoria shows a dried herb dosage. It has been difficult to ascertain a dried dose for the B tinctoria. It’s possible that due to the probable therapeutic range and possible violent purgative reaction, practitioners of Western herbal medicine use a tincture for more precise prescription. (Chevallier, Innerpath, Ody, Yinyang House)

By comparison, tincture dosage of I.tinctoria has not been forthcoming, which may be a result of the broken history of woad use medicinally in this country. The unbroken tradition of medicinal woad use is with Chinese medicine, where decoctions are widely used.

Actions, indications, external use and contra-indications:

As shown in tables 3 and 4, the medical actions and indications of the two plants have similarities, with shared roles in the treatment of infection, external wound healing and a primary affinity with the respiratory system. However, after these initial similarities the plants show differing properties, and secondary affinities with differing parts of the body.

Externally, both plants are indicated for skin ulcers, infections, inflammations and to staunch bleeding, as washes and ointments. . There are more detailed list of uses for B.tinctoria, including mouthwashes, gargles and douches. It may be that the plants could be interchangedly on this but more records of certain uses have been kept due to necessity by the American settlers and then the Eclectics.

Although neither plant is considered toxic (although individual constituents may be) there are warning about use of both plants, particularly internally, causing serious intestinal problems.Both plants are considered to be unsafe during pregnancy and lactation. 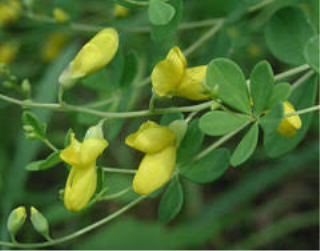 The plants share similarities in that their flowers are yellow and they each have a long thick root, but apart from that their features are that of their families.

The perennial, B. tinctoria has pea-like bilobate flowers, clover like trifoliate leaves and the ability to nitrogen fix in the soil.

The biennial, I. tinctoria, has clusters of tiny flowers and large, fleshy leaves typical to the cabbage family and successive growing may be detrimental to future crops, possibly due to the glucosinolates which are common in the Brassicaceae family.

Both plants are happy in temporate climates in sunny locations but have evolved on different land masses, B. tinctoria being native to North-East America and South-East Canada. I’tinctoria’s native range is South-East Europe to West Asia.

Method of collection, conservation and cultivation:

Neither plant presents problems for cultivation in temperate climates and neither are listed as threatened although B. tinctoria has suffered from over harvesting of the root. The leaves of both plants can be collected through out the summer, I. tinctoria can have multiple cuttings through out the season.

The roots of both plants can be dug up from autumn to spring. I. tinctoria can be dug up after it’s second year of growth. It is recommended that if digging up the B. tinctoria root it is split and half left to grow.

Neither plant likes to be transplanted due to their extensive root growth.

The constituents of these plants differ remarkably, as shown in Table 5, and are quite typical of the plant families from which they belong.

It is notable that the specific and unusual constituents that they do share is the indigo precursors, isatans, which are present in all indigo bearing plants.

There is on going research and many studies available on these two plants. Of particular interest are the constituent isatins (derived from isatan), which is found in both plants and are the precursors to the indigo, which has a wide variety of pharmacological activities such as antimicrobial, anticancer, antiviral, anticonvulsant, anti-inflammatory and analgesic (Mathur 2014). Tryptanthrin in I. tinctoria is currently of interest as It has broad spectrum of biological activities including anticancer activity, anti-inflammatory, antiprotozoal, antiallergic, antioxidant, and antimicrobial. (Sundeep et al)

Energetics and traditional use:

Culpeper (1653 ) names woad as a ‘cold dry plant of Saturn’, which agrees with TCM which lists Indigo and Woad as cold and for removing heat and toxins from the body. These energetics tie in with the traditional use of both plants as treatment for bacterial and viral infection and inflammation. (Sacred lotus)

Woad is known to have been used by the ancient Scots on their bare skin when going in to battle. The first nation Americans used indigo for open wounds and skin infections. When the European settlers arrived in America they learnt about indigo and found it useful for the infectious diseases they were prone to. (Fisher2018)

Both plants have a long tradition of use and have many similarities despite their differences. It appears that the break in use of woad in the Western tradition has influenced the view and use of it as a medicine, especially when compared with the more ‘New World’ applications of Indigo. However, the unbroken tradition of I. tinctoria in TCM along with scientific research into the application of constituents in modern medicine, will no doubt make both plants worthy of further research.