Astaxanthin (C40H52O4) is a carotein pigment and a fat soluable nutrient about 596.8 Dalton (Fig.1 and 2). The extended chain of conjugated (alternating double and single) double bonds is responsible for its red colour and antioxidant activity. Mainly used in medicnal purpose such as free radical scavanger and an immunomoderator and medical ingredient against degenerative diseases. They are also known as king of proteins. The natural astaxanthin is a powerful antioxident. This is responsible for red colouration in muscles of salmon, trout, lobster, shrimp and crab from their diet. Economically it is used as pigmentation agent in aquaculture feeds, food industries and cosmetics. This is mainly present in bacteria, fungi, algae, plants and animals. At this context of high demand with expensive market price, the high level production of natural astaxanthin is very important. 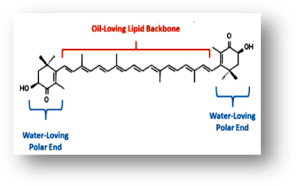 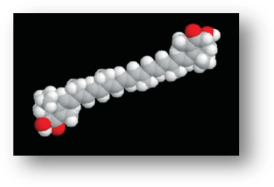 The production of astaxanthin by conventional gentic engineering of agrobacterium mediated gene transfer is less practicable and low yields. The majority of astazanthin produced synthetically and it contains some byproducts or intermediates. Sometimes conntaminated with other reaction of byproducts. So that its commerical application was restricted in aquaculture feed.

The metabolic engineering of tobacco plants used to bioproduction of astaxanthin (Fig.3). It is potential for large scale production by transgenic plants. The tobacco plant has the ability to accumulation of the high concentration of carotenoids in the thylakoid membrane and lipid globule in the plastid. The plastid engineering has the potential to reached high levels of protein accumulation in transformants. The two genes encoding Brevundimonas sp. (Marine bacterium) CrtW and CrtZ are introduced in the chloroplast by the translocation across the plastid membrane. The plastid vectors to insert the foreign genes between rbcL and accD through homologous recombination. The both genes were arranged as an operon under the control of a tobacco derived promoter Prrn. 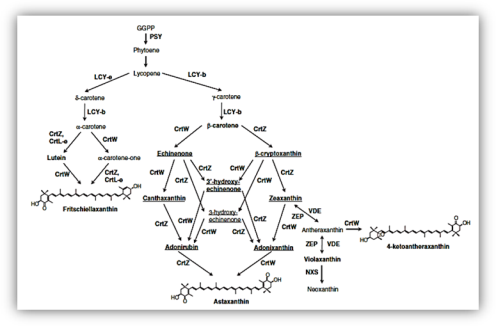 In hybridisation to the rbcL, digestion of EcoRV OF crtZ/crtW integrated (Fig.4a). The integration of transgenes was verified by Southern blot techniques (Fig.4b). All transformants were accumulated the transgenes derived mRNA. An increase in dxs and psy transcript levels was observed in the ZW-2 and ZW-9 lines (Fig. 4 c and d). 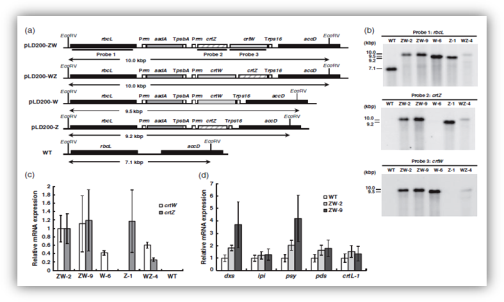 Colour change was observed in transformed plant. No expression occurred in Wild–type plants (Fig.5). The nuclear transformants were removed the other accumulated unprocessed proteins not functional and interfere with the results. This is used to avoid the contamination. 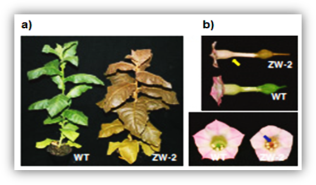 The metabolic engineering to the production of desired compounds in plant tissues and to provide better understanding of genetically determined human metabolic disorders broadens the interest in this field (San et al., 1998) and elucidation of their control as determinants of metabolic function and cell physiology (Koffas et al., 1999). Carotenoids are synthesized within the plastids from the central isoprenoid pathway (Hirschberg, 1999). Metabolic engineering in plants is useful to increase the abundance of specific valuable metabolites (Uxue et al., 2013). Combinatorial nuclear transformation is a novel method for the rapid production of multiplex-transgenic plants (Zhu et al., 2008, 2009). Transformed DNA carries a spectinomycin-resistance gene (aadA) under the control of lettuce chloroplast regulatory expression elements, Lettuce plastid genome sequences insertion between the rbcL and accD genes and these are good for high level production of medicines, antibodies etc. (Kanamoto et al., 2006).

In the present study the growth and photosynthesis of tobacco transformants were analysed under light conditions of 300µmol photons m-2 s-1. There is no significant difference in the diameter of plants between the transplastomic and wild type plant at the flowering stage. The transplastomic tobacco was increased the production of astaxanthin by 2.1 fold and a novel variety of pigment carotenoid-4 ketoantheraxanthin was also produced.

Transplastomic tobacco that expressed two genes encoding CrtW and Crtz from Brevundimonas sp.SD212 accumulated large quanties of astaxanthin at concentration up to 5.44% of the total carotenoids and it showed the production of astaxanthin higher than the previous works.

Astaxanthin is work as a super-powerful antioxidant and quickly eliminate free radicals and neutralize singlet oxygen (Capelli and Gerald 2013). In order to these economic values, so many studies were reported for the high level production of the astaxanthin from transgenic plants. Integration of Paracoccus sp.N81006 crtW and crtZ genes in to the tobacco nuclear genome accumulated trace amount of astaxanthin (Ralley et al., 2004), it is only one by tenth of those found in ZW-9 plants. A trace level of astaxanthin produced from transgenic potato leaf expressing the crtO gene of Synechosystis sp. PCC6803 under the CaMV 35S promotor (Gerjets and Sandmann, 2006). Complementation analysis by E.coli that revealed the CrtW (CrtO) and CrtZ (cyp175A) proteins respectivly Paracoccus sp.N81006 and synechosystis sp. PCC6803 (Choi et al., 2005, 2006, 2007). The higher levels of astaxanthin content in the transplastomic tobacco plants attributable to the Brevundimonas sp. SD212 CrtW and CrtZ. H. pluvialis bkt gene linked to the pea Rubsico small unit transit peptide sequence in carrot nuclear genome under the control of promoters (double CaMV 35S, Arabidopsis-ubiquitin or RolD from Agrobacterium rhizogenes and the transgenic carrot plant accumulate large amount of astaxanthin in leaves and roots (Jayaraj et al., 2007). But in the leaves the amount was only 0.0347 mg/g-1.

The cDNA of the gene CrtO from the alga H. pluvialis, encoding β-carotene ketolase transferred to the plant under the regulation of the tomato Pds (phytoene desaturase) promoter. The transit peptide of PDS from tomato was used to target the CRTO polypeptide to the plastids (Mann et al., 2000). Chromoplasts in the nectary tissue of transgenic plants accumulated astaxanthin and other ketocarotenoids, changing the color of the nectary from yellow to red.

A transgenic Arabidopsis plants produced by β carotene hydroxylase gene (Chyb) on oxycarotenoid biosynthesis that over-expressed Chyb under the control of a 35S promoter. Zeaxanthin and neoxanthin were two- to three-fold greater relative to the whole of violaxanthin, a final product in the xanlthophyll pathway, was 1.3-fold higher than the control and β carotene declined as much as 2.4-fold and astaxanthin produced from transgenic plant (Cho et al., 2008).

Adonis aestivalis is synthesizing and accumulating large amounts of astaxanthin and other ketocarotenoids. An enzyme of ketocarotenoid biosynthesis in the flowers of Adonis aestivalis by the metabolic pathway with the help of E.coli is useful. The formation of astaxanthin requires only the addition of a carbonyl at the number 4 carbon of each beta-ring of zeaxanthin, a carotenoid typically present in the green tissues of higher plants (Cunningham and Gantt 2005). The production of astaxanthin from beta carotene by metabolic engineering pathway was also reported by Misawa 2009.

A major carotenoid in Sphingomonas sp. PB304, originally isolated from a soil was identified as astaxanthin dideoxyglycoside. Sphigomonas elodea-derived crtI and Nostoc sp. PCC 7120-dervied crtW genes were used for sequential analysis by sis enzymes pathway, including CrtX on the phytoene intermediate for the production by Tao et al., 2006.

Chlamydomonas reinhardtii has been genetically engineered with the β carotene ketolase cDNA from Haematococcus pluvialis, bkt1 involved in the synthesis of astaxanthin and produced ketozeaxanthin (Leon et al., 2007). Methylomonas sp. strain 16a is an obligate methanotrophic bacterium used to produce, astaxanthin under the control of the native hps promoter in the chromosome. Canthaxanthin produced as main carotene and expression of two copies of crtZ and one copy of crtW led to the accumulation of a large amount of adonixanthin, more than 90% was astaxanthin.

Co-expression of the algal β-carotene ketolase from Chlamydomonas reinhardtii and β-carotene hydroxylase from Haematococcus pluvialis, a unique pair of enzymes identified to co-operate perfectly in converting β-carotene to astaxanthin by functional complementation in E.coli. Expression of the two enzymes in tomato up-regulated most intrinsic carotenogenic genes and carbon flux into carotenoids resulted massive accumulations of mostly free astaxanthin in leaves (3.12 mg/g) and esterified astaxanthin in fruits (16.1 mg/g).This is a 16-fold increase of total carotenoid capacity and without affecting the normal growth and development of plant. The crop plant is useful to high yield production of astaxanthin for medicinal and other purposes (Huang 2013).

The result of the astaxanthin production from tobacco leaves compared to the result of the study of tomato leaves. As a result, the transplastomic tobacco yielded astaxanthin at 5.5 mg/g in leaves due to the plastid transformation is applicable only for a few model plants, making it difficult to copy the efficient pathway to plant tissues rich in chromoplasts and carotenoids for economical production of astaxanthin. But the amount of astaxanthin was high in transgenic tobacco (5.5mg/g) leaves than tomato leaves (3.12mg/g). Combined engineering of TCA and PPP modules had a synergistic effect on improving β-carotene yield, engineering of MEP module resulted in 3.5-fold increase of β-carotene yield (Zhao et al., 2013).

Recently a similar works had done by Harada et al., 2014, the plastid genome of lettuce (Lactuca sativa L.) cv. Berkeley was site-specifically modified with the addition of three transgenes, which encoded (CrtZ) and CrtW) from a marine bacterium Brevundimonas sp. strain SD212, and isopentenyl diphosphate isomerase from a marine bacterium Paracoccus sp. strain N81106. Transplastomic lettuce plants were able to grow on soil at a growth rate similar to that of non-transformed lettuce cv. The germination ratio of the lettuce transformants (T0) (98.8 %) was higher than that of non-transformed lettuce (93.1 %). The transplastomic lettuce leaves produced the astaxanthin fatty acid (myristate or palmitate) diester (49.2 % of total carotenoids), astaxanthin monoester (18.2 %), and the free forms of astaxanthin (10.0 %) and the other ketocarotenoids (17.5 %). The artificial ketocarotenoids about 94.9 % of total carotenoids (230 μg/g fresh weight). This is the first report of astaxanthin esters produced from a transgenic plant by transplastomic leaves. This study showed the high amount of astaxanthin esters (10.0%) from transplastomic lettuce plants.

The production of ketocarotenoids in plant tissues was a key objective of the METAPRO project. Plastid transformation was one approach. High astaxanthin is in tomato fruit. Fruit containing up to 25mg/g DW Astaxanthin in a mono-esterified form have been generated and the phenotype stable. The production of ketocarotenoids at very high level in tobacco, tomato (leaf and fruit) and potato (leaf and tuber) was reported by METRAPO. 2014.

METRAPO. (2014) Final Report Summary – METAPRO (The development of tools and effective strategies for the optimisation of useful secondary METAbolite PROduction in planta),1-18. http://cordis.europa.eu/result/rcn/140444_en.html.