Among Cell biologists ‘Apoptosis’ is the most studied topics. It plays an important role in understanding the development of many disease and therefore gives clues for its treatment. Cancer is defined as uncontrolled growth of cells. In cancer there is imbalance in the rate of cell division and cell death. It is due to resistance or too little apoptosis. Apoptosis acts like a double edge sword it can cause a problem as well as treat it. Many scientists are researching and coming up with drugs that target different aspects of this process. Hence Apoptosis plays an important role in cancer as well as in anticancer drugs.

In multicellular organisms the cells are highly organized, which are tightly regulated. This is achieved due to control of rate of cell division and cell death. Cells which are not needed undergo a suicide mission through activation of an intracellular death program known as ‘ Appoptosis’. The term Apoptosis is derived from a Greek word which means ‘falling off’ just as leaves fall off during the autumn. It was discovered by Kerr et al in the year 1970 and till date it is one of the most researched topics in biology. Since it’s a highly organized process there are many physiological and pathological conditions involved. This process also causes many morphological as well as biochemical changes. The morphological changes are membrane blebbing, chromatin condensation, nuclear fragmentation, cell rounding, pyknosis and formation of apoptotic bodies which are phagocytosed by macrophages. The biochemical change includes activation of caspases which are a group of enzymes belonging to cysteine protease family, breakdown of protein and DNA and recognition by macrophages. 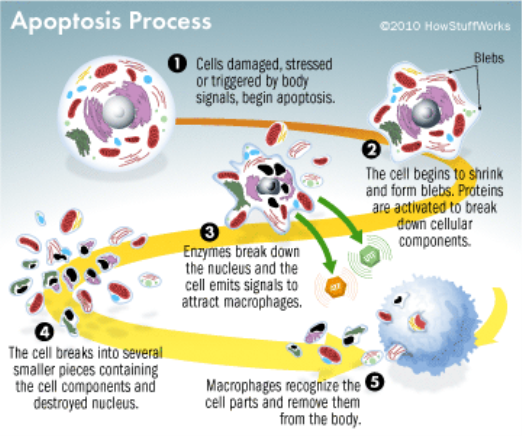 Apoptosis is a very important pathway as it helps in understanding the pathogenesis which may be applied in developing drugs that target genes or pathway of apoptosis. There are two common pathways of apoptosis known as intrinsic and extrinsic pathway. The intrinscic pathway is mediated via the mitochondria while extrinsic is mediated through the death receptors and ligands.

In extrinsic pathway, a death ligand (TNF and FasL) binds to a death receptor ( TNFR1 and Fas /CD95) which leads to formation of binding site. The binding site is for an adaptor protein which are recruited in the intracellular domain of death receptors. A complex of ligand-receptor-adaptor is formed known as death inducing signaling complex (DISC) which leads to activation of pro-caspase 8 to caspase 8 (initiator caspase for apoptosis). While the intrinsic pathway as the name suggests occurs within the cell in the mitochondria. An internal stimulus usually initiates this pathway such as irreparable damage, high concentration Ca 2+in the cytosol and hypoxia. The release of cytochrome c and other apoptotic factor such as apoptosis inducing factor (AIF), direct IAP binding protein with low pI etc leads to formation of a complex called ‘Apoptosome’. Apoptosome is made up of Apaf-1,caspase 9 and cytochrome c. The initiator caspase for intrinsic pathway is caspase 9 while for extrinsic it is caspase 8. Both these pathways converge at caspase 3 and activates it and ultimately leads to death of a cell.

Cancer is abnormal growth of cells. It is also known as malignancy. Cancer may be due to genetic changes whereby a normal cell is converted into a tumorous cell. Avoidance of apoptosis is one of the important features in a cancerous cell. In carcinogenesis, resistance to apoptosis or reduction in its process plays a key role and can be obtained in many ways. Generally there are three ways, in the one of the ways there is disruption in the balance of pro-apoptotic and anti- apoptotic proteins. The pro –apoptotic (eg: Bax, Bad, Bcl-Xs) and anti-apoptotic proteins (eg: Bcl-2, Bcl-XL, Mcl-L etc) are the two main groups of Bcl -2 proteins. The anti-apoptotic proteins regulate apoptosis by blocking the release of cytochrome c in mitochondria while the latter acts by promoting the release. Disruption of this balance causes impairment in apoptosis process in the affected cells. This may be because of over expression of anti-apoptotic proteins or under expression of pro-apoptotic proteins or combination of the two. Another player is p53 which is a tumor suppressor protein and is known for inducing apoptosis. p53 is called as the ‘guardian of the genome’. More than 50% of human cancers are due to defects in this protein. Inhibitors o f apoptosis proteins (IAPS) are a group of proteins which inhibit caspases by increasing the degradation of the activated caspases or blocking them from their substrates. The second way is by decreasing the action of caspases which are mainly involved in initiation of apoptosis and cytokine processing. Low levels of these cause dysregulated apoptosis and cancer. The third is the impairment or abnormality in the death receptor signaling can avoid apoptosis.

Anticancer drugs as the word suggests are drugs which are used against cancer or to treat malignancies. Cancer can not only be treated with drugs or chemotherapy but also by other ways such as surgery or radiation therapy. A wide range of anticancer drugs exist in our world from A to Z depending on the different types of cancer. These cytotoxic drugs are classified based on their mechanism into Alkylating agents (eg: cyclophosphamide and melphan. ) and platinum agents (cisplatin and carboplatin). The Alkylating agents act by alkylating the base residues of nucleic acids and form DNA adducts. It can be further subdivided based on their chemical structures. (Eg: nitrogen mustards, nitrosureas). The platinum agents form DNA adducts which leads to cell death (Apoptosis). Antitumor drugs/antibiotics include anthracyclines (eg: doxorubicin) and non – anthracyclines (eg bleomycin ),tubulin binders (eg: vinca alkaloids and taxanes ) which act by inhibiting or stabilizing formation of microtubules and polymerization of microtubules, antimetabolites, camptothecin analogues (eg : irinotecan ). However a major drawback of these drugs is that they have side effects, they not only target the cancerous cells but also other cells which grow/reproduce quickly like hair follicles, ovaries and testes,blood forming organs (lymph nodes, bone marrow, spleen, liver). most of these anticancer drugs or agents that are used today were developed before the mechanism of apoptosis was known. New adavanced therapies based on the understanding of apoptosis are developed and our still at the clinical trial stages. However, discovery of apoptosis mechanism and its regulation has given light on new ways of treating cancer.

Most but not all chemotherapies or radiotherapies can induce apoptosis has been proved invitro as well as in vivo. But they may have direct toxic activities. Some of these drugs indirectly or directly induce apoptosis like the steroid dexamethasone. Death receptor ligands like TNF act indirectly on the host endothelial cells. These cells feed the tumor while other death receptor ligand like TRAIL directly induce apoptosis. Bcln-2 antagonists, Smac/Diablo mimetics,Herceptin,Gleevec and Iressa, Rituximab and p53 –MDM2 complex are the anticancer agents which induces apoptosis. Among these the most promising agent is Rituxiamb which is used to treat non-Hodgkin’s lymphoma. It leads to activation of antibody-dependent cellular toxicity and apoptosis.

The anticancer agents activate several pathways which regulate the cell death process either positively or negatively. These agents modulate the intrinsic pathway by changing the expression of Bcl-2 proteins. It can do this by p53 dependent gene transcription. Phosophorylation of Bcl-2 can lead to modifications in their activity. Inducting the translocation of pro-apoptotic proteins only specific BH3 it can modify its subcellular localization. These anticancer agents can also regulate extrinsic pathway by regulating the death receptors like Fas and TRAIL by senitizing tumor cells to their ligand which will amplify the early steps of apoptosis. These drugs also activate several lipid dependent signal transduction in tumor cells that raises or lowers their ability to undergo apoptosis and many other protective pathways cell cycle regulatory molecules and heat shock proteins ( eg : Hsp27). These modifications can improve the efficiency of anticancer agents or drugs.

Ovarian cancer is the most lethal cancer among Us women. Paclitaxel and carboplatin are the drugs used to treat this cancer but most patients develop drug resistance and die due to its reoccurrence. Therefore new strategies and alternatives are needed to discover. Glycogen synthase kinase 3 β (GSK3β) is a possible molecular target for cancer therapy. GSK3β is an overexpressed downstream kinase in serous ovarian cancer. Invivo GSK3β inhibitors were made, selected and synthesized using SKOV3 and OVCA432 serous ovarian cancer lines. A total of 10 inhibitors were synthesized, among them the most effective was GSK3βi 9ING41. This inhibitor was shown to induce apoptosis by various tests through caspase 3 cleavage. This inhibitore were experimented in rats and showed a maximum tolerated a dose of greater than500 mg/kg. Invivo xenograft studies showed that the inhibitor could hinder the tumor progression. Therefore,the growth of serous ovarian cancer can be hindered by GSK3β inhibitors alone or in combination with other drugs.

Microtubule (MT) targeted tubulin polymerizing agents (MTPAS) show high level of clinical activity in ovarian, breast and aero digestive tract cancers by clinical remission. pacitaxel and taxotere have a central role in the treatment of many human epithelial cancers. They act by binding to β tubulin and leads to tubulin polymerization. This polymerization interferes with the function of mitotic spindle and leads to mitotic arrest at the metaphase/anaphase junction. Mitotic spindle checkpoint gets triggered due to the mitotic arrest which ultimately leads to intrinsic pathway of apoptosis.

Apoptosis acts like a double edge sword it can cause a problem as well as treat it. It plays an important role in cancer as well as in anticancer drugs. Many of the anticancer drugs can act either individually or in combination with conventional anticancer. Some of these drugs are preclinical or under clinical trials while some are successful. It is important check that these anticancer drugs act only on the cancerous cells and not on normal cells. Hence follows are required on patients undergoing treatment with these drugs and also on ongoing research.