Bacteria are singled microorganisms which have a simple structure. Majority if the bacteria contain an extrachromosomal DNA which has an autonomous replication. Plasmids are circular and double stranded DNA which contain an origin of replication, antibody resistance marker and a region where gene of interest can be cloned. Due to increased usage of antibiotics, more bacteria’s are gaining resistance to antibiotics. Thus, a need to discover new antibiotics has arisen which incurs an additional cost. These plasmids are widely used as vectors for transporting a foreign DNA into a host cell.

Single celled microorganisms with a simple cell structure are called bacteria. They do not contain membrane or nucleus bound organelles. They contain DNA as their genetic material which controls its functioning. Some bacteria contain extrachromosomal DNA called plasmid which gives it an edge over other bacteria. These extrachromosomal DNA are circular and double stranded, which are commonly found in bacteria, yeast and higher eukaryotes. They have a separate division mechanism from the chromosomal DNA of cell which can be exploited for producing recombinant proteins. These plasmids empower the bacterial cell with resistance to antibiotics. E. coli plasmids are widely used as vectors for carrying extracellular genes into a desired host. Plasmid contains additional gene sequences which help them in chromosomal independent replication, a gene which renders antibiotic resistance and an area of interest where the gene will be inserted. Origin of replication (ORI) is a DNA sequence of 50 to 100 bp which is necessary for the replication of plasmid (Lodish, 1996; Design, 2014). 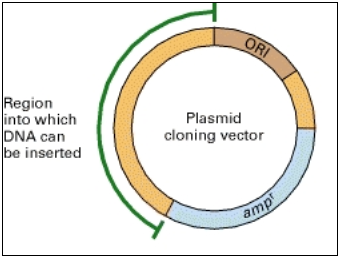 Figure 1 represents the vector used for the propagation in E coli.

When an exogenous DNA is incorporated into the cell resulting into permanent genetic alteration is called transformation. This method introduces and expresses plasmid vector into the E.coli cells. Following stages are required for a successful transformation:

For successful cloning of a gene, plasmid vector must contain a selectable marker. This marker synthesizes an enzyme which inactivates the antibiotic. The positively transformed cells can be selected using a media containing an antibiotic like ampicillin. Cells with recombinant plasmid present in them will be able to deactivate the antibiotic and propagate in the selectable medium. Normal E.coli cells are treated with high concentration of divalent cations like Ca+2 which makes the cell membrane permeable to foreign DNA.

This was autoclaved at 121 Í¦C for 15 minutes at 15psi. LB-Agar was stored in an oven at 60 Í¦C to prevent solidification of agar. It was then poured into a sterile petri-plate and they were labeled as follows:

A tube containing 10ml of E.coli overnight culture was centrifuged at 3000rpm for 15 minutes at 4 Í¦C. This was kept on ice for preparation of competent cells. By using a tip, the medium was discarded into a beaker containing disinfectant. The tubes were inverted to drain out the remaining medium. The pellets were resuspended using a sterile and ice cold CaCl2 solution. These tubes were centrifuged at 3000rpm for 15 minutes at 4 Í¦C. the supernatant was discarded into disinfectant containing beaker. Again, the tubes were inverted to allow the medium to drain out. The pellets were resuspended by gentle pipetting action using 1ml sterile ice cold CaCl2 solution. These cells are called competent cells and were stored on ice for further use in transformation.

Three eppendorf tubes containing 5 µl each of either plasmid (X) or 5µl of distilled water which will be used as a control in the experiment. Using a sterile tip, 200µl of competent cells are added to each tube. This was mixed by gently tapping the tubes and was stored on ice for 30 minutes. The tubes were then transferred to a heating block which was preheated to 42 Í¦C. The tubes were given heat shock for exactly 90 second and were snapchilled by transferring them on ice and left on it for 1 minute. 200µl of test cultures were transferred to the previously prepared LB-Agar plates. Tube X was transferred to plate labeled as AMP-X. While tube C was transferred to agar plate labeled as AMP-C. Another tube C was transferred to plate labeled as No AB-C. Three bent glass rods were dipped in 90% ethanol for sterilization. They were left to air dry for few seconds and spread plate technique was employed. The plates were inverted and wrapped in a cling foil. These plates were incubated at 37 Í¦C overnight.

Transformation Efficiency = No of transformed cells/ ng of plasmid DNA.

The data is represented for the colonies with successful transformants of each group. It can be seen that Group 5 has 1537 colonies grown on a selective media. Also, the transformation efficiency of group 5 is 15.37, which is maximum in the class.

Also, figure 1 and figure 2 represent the graphical data of the experiment.

Table 1 represents the number of colonies transformed by each group. The maximum transformed colonies were obtained by Group 5.

Figure 1: No of transformed E.coli cells. 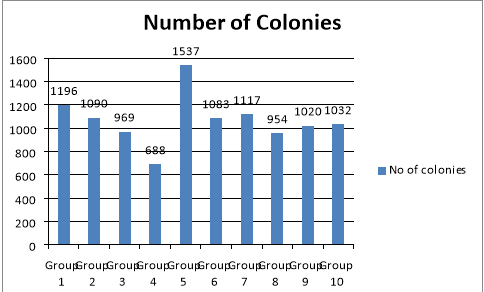 Figure 1: Represents a column graph stating the number of colonies with successful transformants. 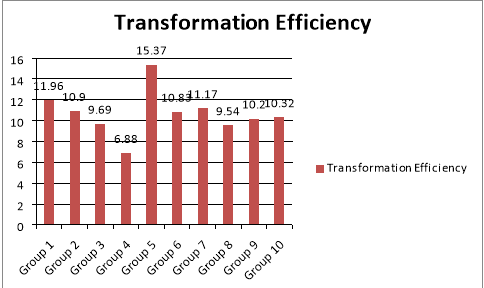 Transformation is a basic technique utilized in molecular biology laboratory on everyday basis. The main purpose of this technique is to introduce and express a foreign DNA into host bacteria. This technique generates large amount of DNA from an infinitesimal amount of starting DNA. This procedure has been observed in nature in many genera’s including Bacillus and Streptococcus but it rarely seen in E.coli (Faculty.plattsburgh.edu, 2014; Roychoudhury and Basu et al., 2009).

For uptake of DNA the cells have to be made permeable using high concentration of divalent cations. This experiment utilized E.coli as a host in which an antibiotic resistant plasmid was introduced using molecular cloning techniques. The competent cells were prepared using sterile ice cold CaCl2. These competent cells were incubated with the extrachromosomal plasmid and were spread plated on LB-Agar plate with ampicillin as selectable antibiotic. The data for successful transformants was collected for each group. Group 5 had the highest transformation efficiency.

One of the major mistakes made during performing this experiment was accidently damaging the cells. Also, during transformation, the cooling was performed for more than a minute and the lid of the agar plates were opened for over a minute. The reason for high number of colonies on the petri plates could be degradation of antibiotic in the medium. This could happen when the antibiotic was added to LB-Agar at higher temperature than 55 Í¦C which degraded the antibiotic.