The twentieth century saw the introduction of many antimicrobials and antibiotics which have been efficient in reducing the mortality rate from 797 deaths per 100000 people in 1900 to 36 per 100000 in 1980 (Arsmtrong, et al., 1999). Although there is a decline in the twentieth century, there are some sharp spikes in mortality in 1918 which was due to the influenza epidemic.

The bacteria “Campylobacter” is the second cause of most frequently reported food borne illness. A comprehensive approach to food safety from farm to table is needed to reduce Campylobacteriosis (Graham et al 1987). Farmers, industry, and food inspectors, food vendors, workers in food service and consumers are each critical link in the chain of food safety. This document answers common questions about Campylobacter, describes how the Food Safety and Inspection Service (FSIS) of the United States Department of Agriculture (USDA) is attending the problem of contamination of meat and poultry products with Campylobacter and offers guidelines for food handling to prevent bacteria like Campylobacter cause disease (Marshall et al 1985).

Salmonella is also a bacterium which is widespread in the intestines of birds, reptiles and mammals (Marshall et al 1985). It can spread to humans through a variety of different foods of animal origin. The disease causing “Salmonellosis” include fever, diarrhoea and abdominal cramps. In people with impaired immune systems underlying health or weakened, it can invade the bloodstream and cause infections that endanger life (Friedman, 2000).

E. coli O157: H7 is bacterial pathogen that has a reservoir in cattle and other similar animals. The human disease occurs after consumption of food or water that has been contaminated with microscopic amounts of cow faeces, causing, often a severe and bloody diarrhoea and cramps painful abdominal, without much fever. In 3% to 5% of cases, you may receive a complication called haemolytic uremic syndrome (HUS) several weeks after the initial symptoms. This severe complication includes temporary anaemia, heavy bleeding and kidney failure (Friedman, 2000).

Sources and incidence of disease differ, sometimes greatly, between developed and developing countries. Transmission from person to person is considered rare in developed countries. By contrast, in developing countries human carriers may have a greater role in the transmission of infection function. In general, it is thought that chickens, poultry and other foods are the most likely sources of infection in developed countries. Number of cases notified beings Human per 100 000 inhabitants caused by Campylobacter jejuni / coli. The data presented are the data available to the drafting group until June 2006 (Blaser et al 2008). 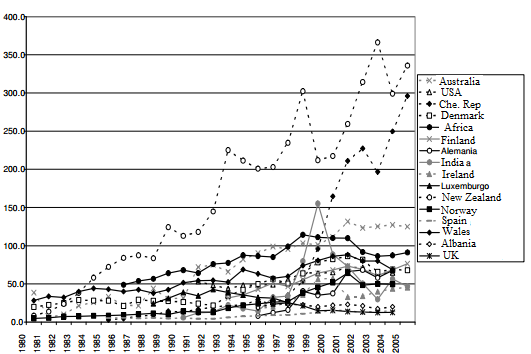 Figure 1: Number of reported human per 100 000 inhabitants caused by Campylobacter jejuni / coli cases. The data presented are the data available to the drafting group until June 2006.

The risk characterization step of risk assessment combines information gathered during the steps of hazard identification, exposure assessment and hazard characterization to generate estimates of the probability of adverse events occurring after the preparation and consumption of chicken. At this stage the probability and magnitude of exposure to Campylobacter with the likelihood that the disease occurs. The resulting risk is expressed as individual risk or risk per serving of chicken (Nachamkin, Szymanski & Blaser, 2008).

In Figures 2 and 3 show the results of the estimated pollution levels on the surface of chicken, as chickens go from farm to stage cooling (using water without chlorine) at the end of the process variation is. The model simulates chickens from positive and negative flocks separately. In Figure 3 the variation in the level of contamination of poultry from flocks with positive test results shown, while in Figure 4 the results are chickens from flocks with negative results (Blaser et al 2008).

The model simulates a system that randomly flocks reach the slaughterhouse, so that one can reach other positive, then negative first and then positive flock. Changes in the levels of contamination of birds from positive and negative flocks are simulated separately as they move along the process (Friedman, 2000). The separation of positive and negative flocks in simulation can help better understand the differences that appear when you enter the system flocks that were previously positive and when they enter the system flocks that were previously negative. This feature could be applied to study the logistics of sacrifice (i.e., producing flocks with negative test results before the flocks with positive results to avoid cross contamination).